Birjani Tourist Zone is a very popular area of the spectacular Corbett Tiger Reserve. This zone is enriched with a huge number of floral and faunal species. Birjani gives a tough competition to Dhikala zone while the tourist's preferences are concerned. The zone is known for its wonderful landscape and is very calm and quite place. The beauty of this place is appreciated by all the visitors. This is one of the most tiger rich areas of the park.Birjani consists of a mixed topography with dense Sal forests combined with grasslands. The entry to this zone is through Aamdanda Gate.

With in Bijrani Zone, Forest rest houses are located in Bijrani and Malani. The rest house at Bijrani has six rooms (Four with double beds and two with single bed) and dormitory consisting of four beds. The compound has its own restaurant and canteen. Elephant rides into the jungle are available from here. The region is frequented by wild animals and birds unperturbed by the human interventions. The chances of spotting a tiger, Sloth bear and herd of elephants are quite high in this part of the park. The rest house in Malani has two rooms (Double bed) and is very popular among bird watchers and tourist seeking a peaceful place. The picturesque beauty of Birjani is magnificent. It is endowed with wide grass lands, thick forests and huge water drains and inspiring count of flora and fauna.

Bijrani safari zone is highly endowed with rich diversity of flora and fauna. Bijrani zone, situated at a suitable distance from Ramnagar is the most preferred zone for Wildlife enthusiasts visiting the park for day visit. It gives its visitors a wonderful experience of the beautiful forests.

The compound has its own restaurant and canteen, where buffet meals are served with a variety of good quality food at affordable price.

BIJRANI(FRH) Malani Forest Rest House was built in 1930's and is located at the edge of the core zone of the Corbett National Park approximately12km northwest of Bijrani. From Bijrani driving through the Machaan chaur, visitors take the old forest track to Mailani and enjoy the sight of deer grazing in the grassland, a Tusker peeling the bark of trees or an occasional encounter witha bear or Leopard. This small FRH named after the Malani sot (stream) offers one of the most picturesque surroundings and a quiet ambience. This is one of the best site for a peaceful stay and enjoying bird watching.

Bijrani safari zone of Corbett national park is one another famous tourist destination of Corbett Park. This zone is located at a few kilometers distance from Ramnagar and is known for having a good number of resorts at Corbett National Park. Bijrani Safari zone shows rich population of tigers and offers a wonderful sighting to its visitors. Amdanda gate is the entrance to this zone and it consists of buffer, tourism and core areas. Safari can be experienced in morning or in the evening, but only out of core areas. On a particular path, limited numbers of vehicles are allowed at a time so that the habitat of wildlife can never get disturbed. If you wish you can enjoy Jeep safari for the full day to catch greater number of wildlife of Corbett Park. Bijrani and malani forest rest house are two wonderful loading options in the Bijrani zone, where you can experience a comfortable stay. Visiting hours for morning and evening slots are as follows

The forest area of Birjani is purely serene and perfect for the tranquil atmosphere. It is seen that the forest vegetation is mainly Sal along with wide grasslands known as Chaur. The topography at Birjani is a bit drier and has diverse character. Several types of deers and antilopes namely Chital (Axis axis), Hog Deer or Para (Axis pornicus), Sambar (Cervus Unicolor), Kakkar (Muntiacus Muntjak) etc are seen here.

A great place to spot tigers and wild elephants, this is also a preferred destination of Birdwatchers.

The chances of spotting sloth bear are high in these forests. They are attracted by both termites and the sweet nectar of Mahua flowers. The bears have been recorded in intoxicated state when the Mahua ferments in their digestive system.

Reptiles seen in this region are the Indian Python, Cobra, Krait and the fearsome King Cobra and different species of Lizards. 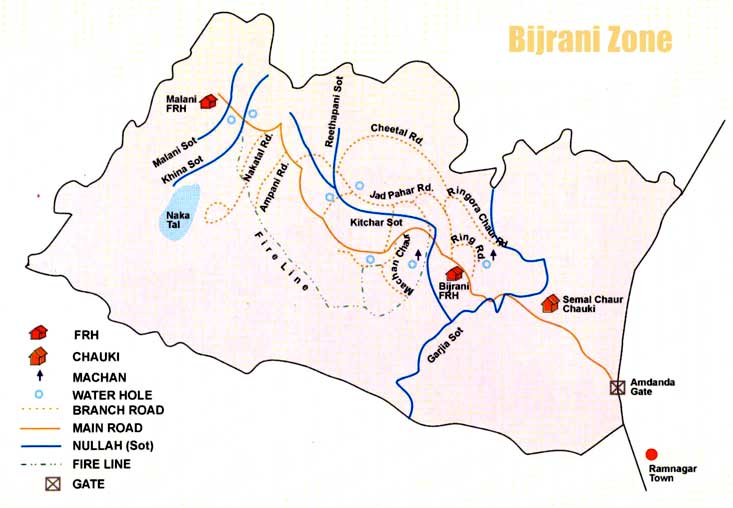 The entry gate to Bijrani zone is Aamdanda gate, which is about 2 km. away from Ramnagar. After entering through Aamdanda gate, you cross about 5 km. of buffer zone before reaching the core area of Bijrani ecotourism zone.

One can enter Bijrani Ecotourism Zone via Aamdanda Gate and the entry timing is as follows: