The region has FRHs in both the Sonanadi Wildlife Sanctuary and the Domunda Tourism Zone of the Corbett Tiger Reserve. Halduparao, the only FRH in the Sonanadi Sanctuary and can be accessed from the Vatanvasa gate. The FRH at Kanda is in Corbett National Park. The FRHs of Morghatti and Pakhro are on the periphery of the Sonanadi Sanctuary and can be approached from Kalagarh and Kotdwar. The FRHs of Lohachaur, Rathuawadhab and Mundiyapani are in the Domunda Tourism Zone of CTR accessed from the. Durgadevi gate ahead of Ramnagar, The FRH of Kalagarh can be approached short of Ramnagar while that of Mohaan is 3okm ahead of Ramnagar.
Sonanadi Sanctuary is spread over 301.18 sqkm of prime forests of the Shiwalik Terai biotic province. Sonanadi literally means the river of gold. Gold panning used to be carried out in the river before the area became a sanctuary. The Palain and the Mandal are the perennial streams of the sanctuary. Historically, it was carved out of Kalagarh Forest Division. It was brought under the umbrella of Project Tiger and became a part of the Corbett Tiger Reserve in 1991 and also a part of Project Elephant. There are no villages inside the sanctuary. The forests of Sonanadi are remarkable for dense sal and rich bamboo clusters besides other species and is teeming with wildlife.

Sonanadi range is located in Sonanadi Wildlife Sanctuary which is a part of Corbett National Park. Developed as a natural habitat of wildlife animals and birds, Sonanadi range is blessed with amazing beauty of flora and fauna. Situated in the north of Sonanadi river, this zone is favoruite place for Asiatic Elephant along with tiger, cheetal, sambhar, leopard and reptiles. Visitors can also enjoy over 550 of birds in their natural habitat.

Lohachaur, Rithuadhab and Halduparao are some Forest Rest Houses in Sonanadi range available for night stay. Safari options like Jeep and elephant are available to enjoy wildlife at Sonanadi Range. Tourists are advised to pre-book entry ticket for a Safari in Sonanadi Zone. One can pre-book entry tickets from Ramnagar office. Sonanadi Zone is open for visitors from 15 October to 15 June and closed for monsoon. There are several safaris operated during a day in Sonanadi zone.

Sonanadi zone falls on Sonanadi Wildlife Sanctuary which is a part of Corbett Tiger Reserve. This is the only zone in Jim Corbett where tourists can walk on foot but richly housed by non-venomous snakes of different kinds. Popular mammals in the region are tiger, leopards and elephants.
Tourists can take wildlife safari on jeep around Sonanadi zone observing the wild beings at proximity and enjoying the enchanting beauty of greenery and nature.

Halduparao FRH built in 1890 is located at a distance of 50km from Kotdwara. The entry is through Vatanvasa gate followed by a 10 km drive on a forest road. It is located on the right bank of Palain river at an elevation of 385m, giving visitors a panoramic view for the river and the forests nearby. The FRH is over l00 years old.

Rathuwadhab is a modest FRH built in 1899 on the banks of the Mandal river. Overlooking the suspension bridge and lime painted settlements with slate roof, it offers a wonderful view of the river and the village nearby.

Mundiyapani FRH is situated amidst dense mixed forests. It was built in 1903 at an elevation of 547m and is very good site for avid bird watchers. A drive to Halduparao FRH in Sonanadi Wildlife Sanctuary is recommended for those staying here.

The visitors can go for an Elephant Safari or Jeep Safari. Both facilities are provided in the Sanctuary. Prior bookings are required for Jeep safari. Tourists can also go for a forest trail with armed guard. This can prove to be real thrilling experience of a life time. Sanctuary is located near Corbett National Park, and tourists can expect to see Asiatic Elephants, Tigers and many other species in their natural Habitat.

Forest Rest Houses are available a Halduparao at Sonanadi Wildlife Sanctuary located between the rivers Palain and Sonanadi, Loha chaur and Rathuadhab.

Sonanadi Wildlife Sanctuary is blessed with a surprise package loaded with various faunas, when it comes to the fauna part. The sanctuary is match with the typical North Indian tropical forests.
The plant life of the sanctuary is rich in different species of Sal, Sheesham, Semal, Bakli, Aonla, Jamun, Kanthber, Figs and along with medicinal plants and some endangered species of Herbs and Shrubs.
The Wildlife reserve is the shelter to about 600 types of resident and migratory birds. The diversity of avifauna in Sonanadi Sanctuary represents approximately 6% of the total bird species in the world. The profuse gathering of bird species in the sanctuary offers a prospect to view 150 species of birds in a limited visit in Sonanadi Sanctuary. The kinds of Birds normally seen here are, Thrushes, Pheasants, Hornbills, Warblers, Flycatchers, Wall Creeper, Changeable Hawk Eagle, emerald Dove, Himalayan Bearded Vulture, Falcon, Brown Fish Owls, etc. 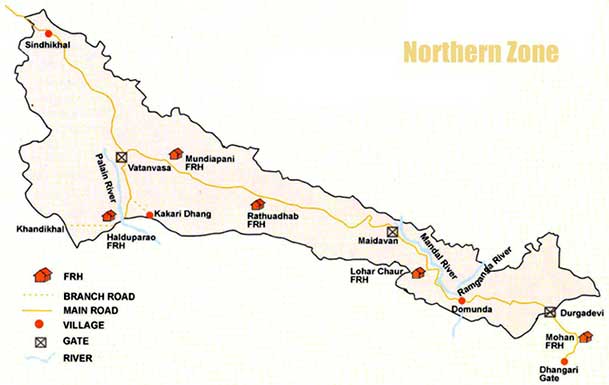 Tourists can enjoy a wildlife safari to Sonanadi Zone by taking Elephant safari and Jeep safari from Durga Devi Gate, Kalagarh Gate and Vatanvasa Gate.
All gates are well connected by road and visitors can book a Safari from Ramnagar office of Park authorities of Corbett National Park.